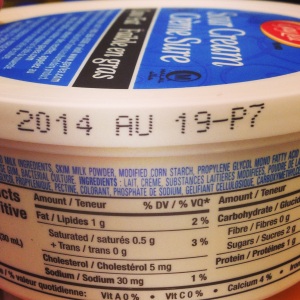 Yesterday, at the grocery store, I picked up a small container of sour cream for our chicken tacos we were making and glanced at the best before date on it: August 19.  It didn’t take more than a second for me to chuckle at it.  I turn 30 on August 20, so to see a best before date on the day before my age shifts to the BIG 3-0 was more than a little fitting.

I often notice dates on or around my birthday.  Not that I’m birthday obsessed (I’m happiest with a delicious dinner, wine and a few friends to celebrate with) but the date is obviously important to me.  As a kid I’d think, when I saw a carton of milk that expires later in August, ‘Hey, I’ll be 13 when this expires’, knowing that I’d have to cross a milestone to get to when the milk goes sour.  Yes, a little odd that I’ve always projected this notion onto dairy products.

Back then I wasn’t worried about turning a year older.  Not that I can say I am ‘worried’ now.  But the thought of it is a bit paralyzing – like a realization is going to hit me or I’ll feel different any day now.

And I have felt different.  From putting my back out after leaning over the bathtub to grab my shampoo to feeling the effects of a bum ankle thanks to a moderate running habit, I’ve noticed some physical changes (much different from those coming of age ones) popping up.  This time it’s another kind of ‘coming-of-age’ and I’m realizing it’s going to take time for me to accept it.

So, instead of feeling like I’ve reached my best before date, it’s time to realize that August 20 is my ‘production date’.  It’s a start, not an end, but my sour cream probably won’t feel the same way.